The series ”Innocence” and ”Survivors 12/26/04” study the possibility of representing corporeal memory – wheter traces of our past can be depicted in the form of a painted gesture on the body. The past and the present are intertwined especially in the ”Survivors” which presents two unvictimised survivors of the tsunami 2004. This series also refers to the paintings and performances of Yves Klein yet the location of the ”subject” is somewhat different.

”Family-Kinship” –series presents a phantasm of coupling and generations. The institutions of family and kinship are at a state of constant change.

”Phantasms” –series presents allegories of the controversy of looking at pornography.
The representation refers to the tradition of surrealism. The photographs have been produced in co-operation with a Finnish academic project called PornAcademy. The academics have offered their faces to be used as a canvas for representing the gaze.

The body of work at hand is my latest solution to the problem: How to combine photographic presence with the notion of painting. The works refer to the history of art as well as to the genre of performance. I have examined such topics previously by painting and by experimenting with combinations of oil-paint, video and photography.

The works are either paintings, photographs or performances depending on the point of view of the spectator. Three different layers are interlaced in the works. The first is the photographed person. The second is the painting on his/her face or the body. The third layer consists of the poses, gestures or the performance by the depicted person. 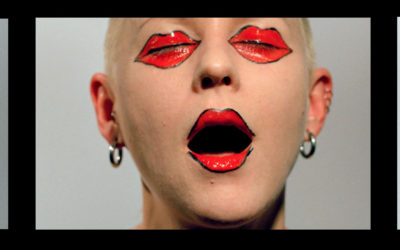